Fighting myself clean through REZ 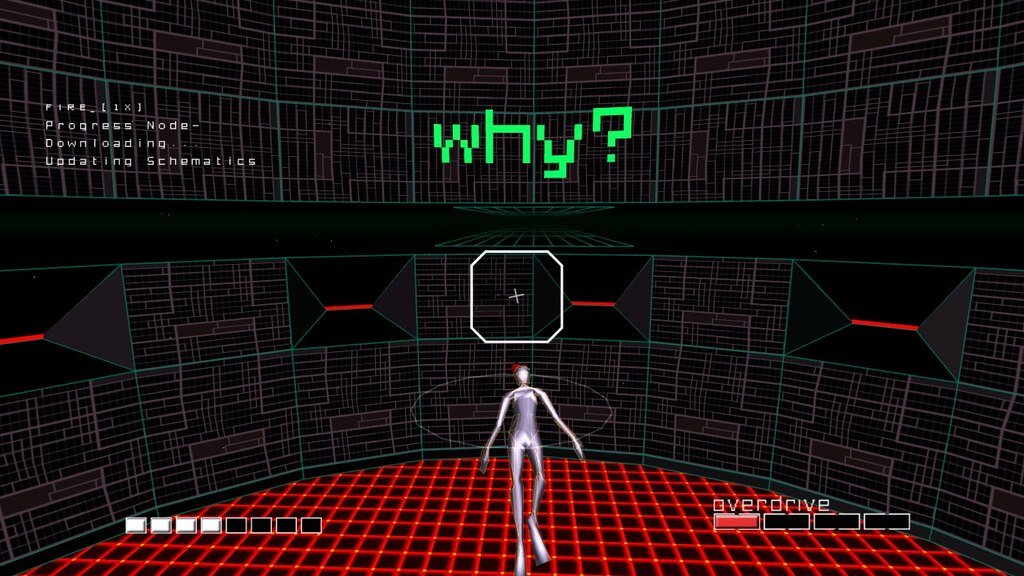 I understand art as a bunch of messy represented concepts that generate some kind of emotion in someone. It may be my background as a journalist, but I can't help but put the weight of my appreciation of art on the spectator's shoulders. I know it's a heavy load and I'm really sorry for all the spectators that don't wish to carry this thing arround, but it's just the way I roll.

Under that definition, videogames not only are arts, they can even be some of the most powerful arts on earth, and in the same way that I've cried to The Muppets or felt touched by furries on twitter, I've also experienced some heavy heavy heavy emotions sitting with a joystick in my hand.

And, although sometimes I get really emotional through pretty tangible concepts found in art, like the the acceptance of being a loser in Little Miss Sunshine, other times I'm left wondering why exactly I'm crying to the blasting synths of Carly Rae Jepsen's Run Away With Me. It's not that i like one experience better than the other, but I like the intrigue that comes with the second one. It's like something calling me out inside of me, like "yeah, you pussy, you're enjoying this, you're feeling this". And so, I've become an addict for that feelin, a confusion chaser if you must.

There's one dude that I know will always deliver that confusion: Tetsuya Mizuguchi. It feels like his stuff is always somehow resonant to me. I've been trapped by the inexplicable perfect mixture of sounds and visuals that turns games like Lumines into pure joy machines. I've spent more time getting int othe beautifuly arbitrary mechanics of Meteos than I like to admit, and I've also experienced REZ. Oh god. I love REZ.

Rez is one of the most impactful experiences I've had playing videogames.

This thing isn't only a pretty well crafted rail shooter, neither because this is also one of the best integrations of music I've seen on a game ever. Rez is impactful because what you get from that experience can seriously be lifechanging.

Obviously I choose to read it as a metaphor for dealing with a side of your inner self that you've been avoiding. Finally facing something that's been bothering about you for so long, with barriers you've built to keep it away that are now so strong that you can't just deal with it in one though. It's some trans shit.

You gotta go deep into yourself to finally face that thing, to see what you are and be who you want to be, who you really want to be. You gotta fly and shoot your way through this machine to find your true soul, one that the game represents as a distinctly feminine AI. In my mind, that's why the credits roll even if you fail. Yeah you could just let it be there, you can just not free her, let her be consumed by the same virus that fought you all the way from the beggining. But you could keep trying, you should keep trying.

That's a feeling that videogames, and REZ in particular, can convey pretty well. I mean, movies and all kinds of arts can too, but the constant interaction of videogames helps to communicate that struggle and make you feel it in pretty powerful ways. That feeling of overcoming a big obstacle is like that primal feeling that a greatly composed song can also give you. It's all about the chills of it all, because it's been a long time since I've felt the way I feel when you hit one of those level changer thingys in REZ and the whole music evolves and you're like "OH SHIT AM I DOING THIS??? AM I FLOWING WITH IT????

And it's only by the end of the game that I felt like I truly understood how to play it. As if it's asking you to go back at it and try to do the whole thing in one long run. In that second try you can go back like you go back to a troublesome time of change in your life and simulate the act of doing it right this time. I know the end, I know that feeling of freedom and liberation that the main antagonist feels once you finish REZ, and yet, I can't help but going back to a time of restrain and pain just to think about how far I've come and how easy it could have been knowing what I know.

And it's not even a hard game, but really getting it is kinda complicated. There's very little dialogue and explanations, but the way the mechanics show themselves to you through their own mysteriousnes is pretty rad. You learn how to play it simply wondering what the hell every single particle does and how you could interact with them better. It's no surprise this guy ended up making one of the best puzzle games ever.

Another thing I felt Rez really does greatly is in how it could be beat in one long run. It encourages you to do it in one session even, when you try to log out. It feels as if it's asking you to solve this in one long steady flow of though, with electronic beats banging in your head, discovering yourself one step at a time.

I did discover some things about myself playing this game, or at least, I felt like I did, and I think that feeling is what matters in the end, cause REZ is about that struggle and that experience, one that's complicated to articulate, but that's worth of experiencing just for the big emotions of this big art.